Some Constraints on the Domain of Phrasal Resyllabification in French 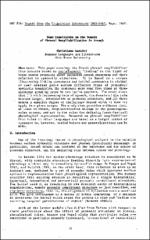 This paper examines the French phrasal resyllabification process known as enchainement 'linking' in the light of three recent proposals about connected speech phenomena and their relation to syntactic structure. It is based on a corpus illustrating linking consonants and initial consonants in minimal or near minimal pairs across different types of prosodic/syntactic boundaries. The sentences were read five times at three different speaking rates by two native speakers. The study shows that (1) with increasing rate of speech, the domain of the rule becomes larger, irrespective of prosodic structure, and (2) there exists a specific degree of disjuncture beyond which it does not apply in a given tempo. The study thus provides evidence that, at least in French, resyllabification belongs to the phonological rules proper, and not to the rules for defining (post-lexical) phonological representation. Research on phrasal resyllabification rules in other languages and based on a larger number of speakers is, however, needed before any generalizations can be made.