Phonemic Quantity, Stress, and the Half-Long Vowel in Finnish 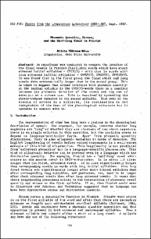 An experiment was conducted to compare the duration of the final vowels in Finnish disyllabic words which have short stressed initial syllables -CVCV(V)- with that in words with long stressed initial syllables -CVVCV(V), CVCCV(V), CVVCCV(V). It was found that in the first group the final short and long vowels were systematically longer than in the second group. This is taken to suggest that stress interacts with phonemic quantity: on the initial syllable in the CVCV(V)-words there is a conflict between the phonemic duration of the vowel and the use of duration as a stress cue. This is resolved by spreading the stress-induced duration to the second syllable. Thus even if the domain of stress is a syllable, its realization is not independent of the rest of the phonological structure but it operates in concert with it.