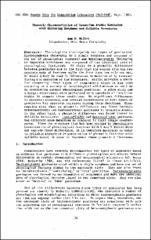 Phonologists distinguish two types of geminates: tautomorphemic (belonging to a single morpheme and composed of one set of phonological features) and heteromorphemic (belonging to separate morphemes and composed of two identical sets of phonological features). If there is a phonetic difference between geminates due to the fact that the second type has two separate sets of features while the first type has only one set, it would likely be cued by differences in duration or by movement during the duration of the consonant. Arabic provides a means for comparing these types of consonants since it has both occurring in a variety of morphological affiliations as well as in contrasting surface phonological positions. A pilot study and a larger experiment were performed with speakers of Levantine Arabic to compare these conditions. No significant differences in duration occurred, and several occurrences of both types of geminates had apparent releases during their durations. These results show that no phonetic difference was found between heteromorphemic and tautomorphemic geminates in Levantine Arabic. On the other hand, a phonetic difference was found linked to syllable structure: tautosyllabic and heterosyllabic geminates had different mean durations as compared to their single counter-parts. Since the structure that has been posited by phonologists (association of phonological features with C and V slots) does not capture these differences, it is therefore necessary to refer to syllable structure(= association of phonetic features with syllable slots) in order to represent these phonetic differences.