The African Slave Trade, American Slaves, and the Migration of Black Mythology 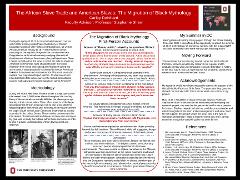 During the 1930s, as part of the W.P.A. Federal Writer’s project, over 2,000 interviews of former slaves were completed. These interviews were transcribed and compiled into a grand collection of first-person accounts of all the former slaves who could be located at the time. Within many of these narratives, hundreds of accounts detail folktales the slaves grew up hearing in their communities. The development of these folk stories, which seem unique to African American slaves in their specifics if not in their generalities, reflect aspects of the larger development of African American culture that arose due to forced migration from Africa and, for some, their movement from the upper-South to the Lower South and Southwest as slavery expanded in the United States. Thus, these stories, along with other aspects of African American culture, arose in part as a product of the intersection of traditional African folklore and new circumstance. This research seeks to explore these stories, determining their origin and tracing their development and their dispersal. This will not only contribute to the current studies of the African Diaspora, but it will also contribute greatly to studies of the inter- and intrastate migrations of slaves that never delve into the culture of slaves and to the cultural studies of slavery that don’t pay much attention to the migrations of slaves. It is my hope through the course of this research to arrive at a more complete understanding of both the significance of African American folklore and the factors, including migration, that shaped it.