Progressing the Image to the Word: A Critical Study of the Cut-Ups 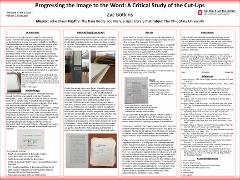 William S. Burroughs began the eleventh lecture of his undergraduate course at the City College of New York by opening with, "In the last class we considered writing as a magical operation" (Burroughs). While he doesn’t define the "magic" of it, Burroughs continues to justify this statement by explaining that magical operations enable one to produce qualitative and quantifiable results to any given experiment. Burroughs also claims that this process of magical experimentation offers insight into generalized criteria for the evaluation of any given text; and that within the experiments themselves resides insight into how to produce successful writing. While Burroughs is often discussed in literary circles as a prominent pioneer in literary deconstructionism, I am interested in approaching Burroughs in quite the opposite way. I want to move Burroughs away from the label of "deconstructionist," at least in the general sense. Burroughs' efforts are often seen as postmodern movements towards abstracting the word from its meaning, but his constant attacks upon linear language, not language itself, offers another motivation. The extensive, and exhaustive process of trial and error in the cut-up method contextualized alongside the personal affinity that Burroughs had for Egyptian hieroglyphs, and his strong push towards imagism offers an alternative motive for Burroughs’ extensive application of the technique: reunification of image and language. Using the drafts available at the RBML, an extensive reading and transcribing of lecture notes, and an interview with James Grauerholz, Burroughs' editor and literary executor, I sought to create a comprehensive study of the cut-ups, their intentions, their misperceptions, and ultimately, the practicality of their use. By first exploring the origins of the cut-ups and then moving onto their methodology, I am able to contextualize the argument, and its counterpoints, presented within the third section of the paper.