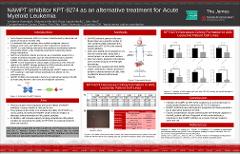 Acute Myeloid Leukemia (AML) is a cancer characterized by abnormal cell growth of immature myeloid cells. Currently, AML is treatable in about 35 to 40% of adult patients who are 60 years or younger, and less favorable in patients who are 60 years or older where rates are 5 to 15%. In addition, most patients have multiple malignant clones of leukemic stem cells, each differing in their responses to treatment. However, studies have shown that inhibition of the enzyme nicotinamide phosphoribosyltransferase (NAMPT) is a possible avenue for treatment of AML. NAMPT is responsible for the production of NAD+, a key metabolite needed for various cellular functions. By inhibiting NAMPT, NAD+ production is expected to decrease, thus resulting in cell death. The purpose of this study is to evaluate the ability of KPT-9274, a novel NAMPT inhibitor, to eradicate leukemic colonies in AML. To assess the ability of KPT-9274 to decrease colony formation, three AML leukemic patient cells were treated with KPT-9274. Cells were plated and incubated on a 6-well cell culture plate, along with a control group in a semi-solid medium. After two weeks, leukemic cell colonies were counted using an inverted light microscope. The cells were washed with 20% RPMI media, underwent a dilution process to achieve a desired amount of cells, and then re-plated to assess self-renewal capacity. Colony formation decreased in the three AML leukemic patient cells by 39.7 to 75.9%. These results are consistent with previous findings that support the drug’s potential to decrease NAD+ production, leading to decrease in colony formation. Self-renewal capacity of the three patients is currently being assessed. Overall, this study provides evidence that the NAMPT inhibitor, KPT-9274, is able to eradicate malignant clones found in AML patients that may lead to patient relapse.