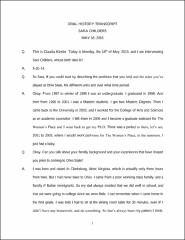 Sara Childers describes her experience as a student and employee at The Ohio State University. She graduated in 1998 with a bachelor’s degree, and then returned in 1999 to pursue two master's degrees. From 2003 to 2006, she worked for the College of Arts and Sciences as an academic counselor. In 2006, she became a graduate assistant for The Women's Place, a position which allowed her to pursue her Ph.D. in Social and Cultural Foundations in Education from The School of Educational Policy and Leadership at Ohio State. Childers describes issues of diversity and discrimination that she has come across while working at the University, and she also discusses the projects for positive change with which she has been involved during her time at Ohio State.