Interview of Anna and Paul Whetstone by Judy Westman 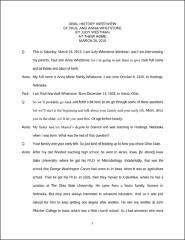 Anna and Paul Whetstone, both doctors, describe their education background, their medical training and their professional careers. Anna, who was originally from Nebraska, was encouraged by her family to pursue a higher degree, and they supported her decision to become a doctor. Paul, who grew up in Columbus, decided in 7th grade to go to college and attended Ohio State to earn both of his degrees. While he was an undergraduate, he was a member of the marching band and lived for a year in Baker Hall. They met while he was an undergraduate sophomore and she was in medical school at Ohio State. Both describe their medical training, and how they chose Millersport to set up a general practice together. Shortly after that, Paul was drafted into the Navy, and Anna describes her experience working and caring for two small children. They also describe running a practice in what was then a remote area. Finally, they describe what they hope their legacies are, for their family, their community and their profession.