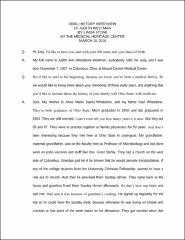 In her oral history interview, Judith Westman discusses her time as a medical student and professional at the Ohio State University after her obtaining her undergraduate degree at Ohio Northern University. Westman began work at Nationwide Children's Hospital, then called Columbus Children's Hospital, and followed a career path into pediatric and prenatal genetics. After working at Children's Hospital for some time, Westman was recruited to establish a clinical cancer genetics program at the James Cancer Hospital at The Ohio State University. Westman worked in pediatrics, genetics, cancer research, and as the chair of the Admissions Committee for the College of Medicine. Westman was later appointed to the role of Associate Dean for Student Affairs and Admissions and the Dean of Medical Education at the College. In her interview, Westman discusses the philosophies she held true throughout her career.