Interview of Richard A. Boyd by Kevlin Haire 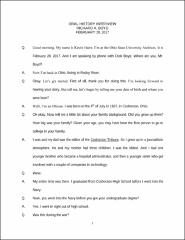 In his interview, Richard "Dick" Boyd discusses his time spent as a student in the College of Education at The Ohio State University, and his career in education after getting his master's degree from OSU in that field. Boyd studied at Capital University for his undergraduate degree in education, and he completed his master's degree at Ohio State. While he was getting his master's degree, Boyd took a course about football taught by Woody Hayes. Boyd's notes taken during Hayes's lecture detail Hayes's playbook and advice for football coaches. Boyd's and Hayes' relationship had a big impact on Boyd's early career in school administration. Boyd went on to work for the State of Mississippi as the State Superintendent as well as working for the Cleveland school district as the superintendent. Boyd's interview consists of details of his life travelling and working between Mississippi and Ohio. Boyd also details some of his personally held philosophies regarding education and how those philosophies impacted his career.