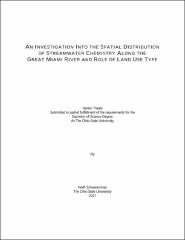 Previous studies have shown that the Great Miami River watershed is a top contributor to nutrient load into the Mississippi River and ultimately to the Gulf of Mexico. High nutrient content corresponds to higher algal bloom rates, which can be devastating to environments and economies. Streamwater chemistry in the watershed has been studied extensively previously, however, a geospatial dataset of the scale studied here has never been collected before, which can provide insight into how the streamwater chemistry changes spatially. The land use type of the upper Great Miami River is predominantly agricultural, with 75.3% of the total upper watershed being agricultural (68.36% cultivated cropland, 6.93% pasture/hay). The land type throughout the area is extremely uniform, where land type changes relative to discharge area are minimal. On May 16th 2017, water samples were collected along the Great Miami River (upper) watershed, and analyzed for major cation, anion, and nutrient concentrations in the following weeks. The null hypothesis was to see if leeching of the agriculture in the area would overload the stream, creating uniform streamwater chemistry across the watershed area. Agriculture accounts for over 68% of the total upstream land use type above the pour point. Post analysis, the data collected have led to the conclusion that the null hypothesis cannot be rejected.