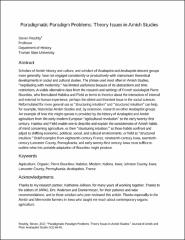 Scholars of Amish history and culture, and scholars of Anabaptist and Anabaptist-descent groups more generally, have not engaged consistently or productively with mainstream theoretical developments in social and cultural studies. The phrase used most often in Amish Studies, "negotiating with modernity," has limited usefulness because of its abstractions and time restrictions. A viable alternative rises from the research and writings of French sociologist Pierre Bourdieu, who formulated Habitus and Field as terms to theorize about the interaction of internal and external in human experience, perhaps the oldest and thorniest issue in the social sciences. Reformulated for more general use as "structuring intuition" and "structured intuition" can help, for example, historicize Amish Studies and, by extension, research on other Anabaptist groups. An example of how this might operate is provided by the history of Anabaptist and Amish agriculture from the early modern European "agricultural revolution" to the early twenty-first century. Habitus and Field enable one to describe and explain the consistencies of Amish habits of mind concerning agriculture, or their "structuring intuition," as those habits confront and adjust to shifting economic, political, social, and cultural environments, or field as "structured intuition." Brief examples from eighteenth-century France, nineteenth-century Iowa, twentieth-century Lancaster County, Pennsylvania, and early twenty-first century Iowa must suffice to outline what this portable adaptation of Bourdieu might produce.