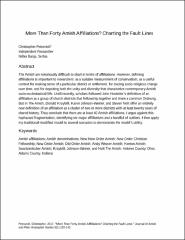 The Amish are notoriously difficult to chart in terms of affiliations. However, defining affiliations is important to researchers: as a suitable measurement of conservatism, as a useful context for making sense of a particular district or settlement, for tracing socio-religious change over time, and for depicting both the unity and diversity that characterize contemporary Amish socio-ecclesiastical life. Until recently, scholars followed John Hostetler's definition of an affiliation as a group of church districts that fellowship together and share a common Ordnung. But in The Amish, Donald Kraybill, Karen Johnson-Weiner, and Steven Nolt offer an entirely new definition of an affiliation as a cluster of two or more districts with at least twenty years of shared history. They conclude that there are at least 40 Amish affiliations. I argue against this haphazard fragmentation, identifying six major affiliations and a handful of outliers. I then apply my traditional-modified model to several scenarios to demonstrate the model's utility.