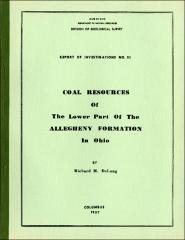 Ohio. Division of Geological Survey. Report of investigations. no. 31

This study of the coal resources of the lower part of the Allegheny formation in Ohio considers all coal horizons from the base of the series to the underclay of the Lower Kittanning No. 5 coal bed, but is devoted mainly to the Brookville No. 4 and Clarion No. 4A coal beds. Other coal beds in the lower part of the Allegheny formation are the Ogan, Winters, Scrubgrass, and Lawrence. The Lawrence coal bed which underlies the underclay of the Lower Kittanning coal bed is thin and contributes no reserves anywhere in the state. In southern Ohio all of the other subject coal beds are represented and are of varying economic importance over an area that is generally centered around Vinton County. In northern Ohio the Brookville coal bed is the only one of the subject coal beds that contains reserves. The Brookville coal bed which is the basal unit of the Allegheny formation contains an estimated 446,215, 000 tons of original coal reserve. Of this reserve 338, 034, 000 tons are confined to the northern field which centers around southern Stark and northern Tuscarawas Counties; the balance occurs in Vinton County. It is a high-volatile B bituminous rank coal suitable for domestic and steam generating purposes. The stratigraphic position of the Clarion coal bed is approximately midway between the Brookville and Lower Kittanning coal beds. The original Clarion coal reserve is estimated at 715,637, 000 tons and is classified as a high volatile B bituminous rank coal. The Ogan and Winters coal beds occupy positions between the Brookville and Clarion coal beds; the Scrubgrass overlies the Clarion coal bed. The thicker portion of these beds is limited almost exclusively to Vinton County where they have been mined for local use. Throughout their extent these coal beds are variable in thickness and structure and do not constitute an important segment of Ohio's coal reserve.

This object may be copyright-protected, and is reproduced here with permission or under the Fair Use provision of copyright law for research and educational purposes. The user is responsible for making a final determination of copyright status. If copyright protection applies, permission must be obtained from the copyright holder to reuse, publish, or reproduce the object beyond the bounds of Fair Use or other exemptions to the law.