Coal beds of the Conemaugh formation in Ohio 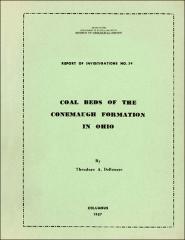 Ohio. Division of Geological Survey. Report of investigations. no. 34

The Conemaugh formation underlies approximately 8, 000 square miles of eastern Ohio. This formation contains at least 18 coal horizons, of which only 6 seams occur with any degree of persistency; even these 6 seams are extremely erratic and vary in thickness and quality within short distances. However, there are several localities where one or more of the Conemaugh coal beds make a considerable contribution to the fuel resources of the State. Available information indicates that the original recoverable coal reserves of the Conemaugh formation in Ohio is approximately 1,329,368, 000 tons. Coal beds 14 inches or more in thickness are considered as constituting recoverable reserves. The Mahoning, Wilgus, Anderson, and Harlem coal beds account for most of the reserves. The Mahoning coal bed in Columbiana and Jefferson Counties contains 284,304, 000 tons; the Harlem coal reserve is 34,560, 000 tons in Carroll County; the Anderson coal reserve is 837 , 504, 000 tons in Muskingum, Guernsey, Noble, and Morgan Counties; and the Wilgus coal field of Lawrence County has an original reserve of 173, 000, 000 tons.

This object may be copyright-protected, and is reproduced here with permission or under the Fair Use provision of copyright law for research and educational purposes. The user is responsible for making a final determination of copyright status. If copyright protection applies, permission must be obtained from the copyright holder to reuse, publish, or reproduce the object beyond the bounds of Fair Use or other exemptions to the law.