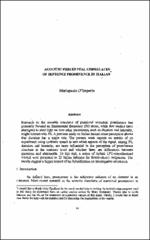 Research on the acoustic correlates of perceived accentual prominence has generally focused on fundamental frequency (F0) alone, while few studies have attempted to shed light on how other parameters, such as duration and intensity, might interact with F0. A previous study on Italian lexical stress perception shows that duration has a major role. The present work reports on results of an experiment using synthetic speech to test which aspects of the signal, among F0, duration and intensity, are more influential in the perception of prominence structure at the sentence level and whether there are differences between questions and statements. To this end, a series of hybrid LPC-resynthesized stimuli were presented to 22 Italian listeners for forced-choice judgments. The results suggest a bigger impact of the hybridization on interrogative utterances.