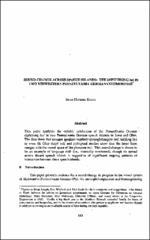 This paper analyzes the variable production of the Pennsylvania German diphthong /aɪ/ in two Pennsylvania German speech islands in Iowa and Ohio. The data show that younger speakers regularly monophthongize /aɪ/, yielding [ɛː] or even (in Ohio only) [eː], and perceptual studies show that the latter form merges with the vowel space of the phoneme /eː/. This sound change is shown to be an example of language drift (i.e., internally motivated), though its spread across distant speech islands is suggestive of significant ongoing patterns of interaction between these speech islands.