Unus Testis, Nullus Testis? The Significance of a Single Token in a Problem of Later Medieval Greek Syntax 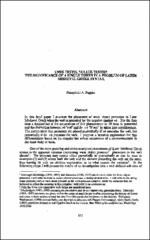 In this brief paper I examine the placement of weak object pronouns in Later Medieval Greek when the verb is preceded by the negative marker οὐ. For the first time a detailed list of the occurrences of this phenomenon in 10 texts is presented and the distinction between οὐ "not" and ἄν oὐ "if not" is taken into consideration. The results show that pronouns are placed postverbally if οὐ precedes the verb, but preverbally if ἄν oὐ precedes the verb. I propose a tentative explanation for this differentiation based on the singular but robust occurrence of a counterexample in the same body of texts.