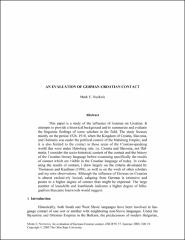 This paper is a study of the influence of German on Croatian. It attempts to provide a historical background and to summarize and evaluate the linguistic findings of some scholars in the field. The study focuses mainly on the period 1526–1918, when the Kingdom of Croatia, Slavonia, and Dalmatia was under the political control of the Habsburg Empire, and it is also limited to the contact in those areas of the Croatian-speaking world that were under Habsburg rule, i.e. Croatia and Slavonia, not Dalmatia. I consider the socio-historical context of the contact and the history of the Croatian literary language before examining specifically the results of contact which are visible in the Croatian language of today. In evaluating the results of contact, I draw largely on the criteria developed by Thomason and Kaufman (1988), as well as on the work of other scholars and my own observations. Although the influence of German on Croatian is almost exclusively lexical, calquing from German is extensive and points to a higher degree of contact than might be expected: The large number of loanshifts and loanblends indicates a higher degree of bilingualism than pure loanwords would suggest.