Looking for Roots in the Substrate: The Cases of Ebonics and Anglo-Irish 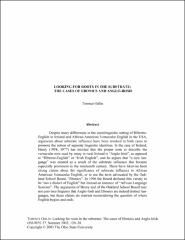 Despite many differences in the sociolinguistic setting of Hiberno- English in Ireland and African-American Vernacular English in the USA, arguments about substrate influence have been invoked in both cases to promote the notion of separate linguistic identities. In the case of Ireland, Henry (1958, 1977) has insisted that the proper term to describe the vernacular now used by many in rural Ireland is “Anglo-Irish”, as opposed to “Hiberno-English” or “Irish English”, and he argues that “a new language” was created as a result of the substrate influence that became especially prominent in the nineteenth century. There have likewise been strong claims about the significance of substrate influence in African American Vernacular English, or to use the term advocated by the Oakland School Board, “Ebonics”. In 1996 the Board declared this variety to be “not a dialect of English” but instead an instance of “African Language Systems”. The arguments of Henry and of the Oakland School Board may not convince linguists that Anglo-Irish and Ebonics are indeed distinct languages, but these claims do warrant reconsidering the question of where English begins and ends.