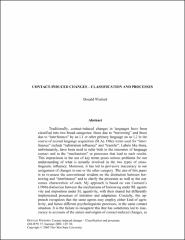 Traditionally, contact-induced changes in languages have been classified into two broad categories: those due to “borrowing” and those due to “interference” by an L1 or other primary language on an L2 in the course of second language acquisition (SLA). Other terms used for “interference” include “substratum influence” and “transfer”. Labels like these, unfortunately, have been used to refer both to the outcomes of language contact and to the “mechanisms” or processes that lead to such results. This imprecision in the use of key terms poses serious problems for our understanding of what is actually involved in the two types of crosslinguistic influence. Moreover, it has led to pervasive inaccuracy in our assignment of changes to one or the other category. The aim of this paper is to re-assess the conventional wisdom on the distinction between borrowing and “interference” and to clarify the processes as well as the outcomes characteristic of each. My approach is based on van Coetsem’s (1988) distinction between the mechanisms of borrowing under RL agentivity and imposition under SL agentivity, with their shared but differently implemented processes of imitation and adaptation. Crucially, this approach recognizes that the same agents may employ either kind of agentivity, and hence different psycholinguistic processes, in the same contact situation. It is the failure to recognize this that has sometimes led to inaccuracy in accounts of the nature and origins of contact-induced changes, as well as to conflicting classifications of the outcomes of contact. The present paper proposes a more rigorous and consistent classification, based on the kinds of agentivity involved.