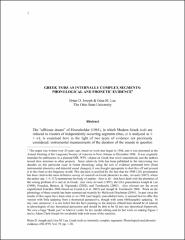 The "affricate dream" of Householder (1964), in which Modern Greek ts/dz are reduced to clusters of independently occurring segments (thus, ts is analyzed as /t + s/), is examined here in the light of two types of evidence not previously considered: instrumental measurements of the duration of the sounds in question compared with related sounds, and the proper formulation of a dissimilatory dialectal sound change. This evidence shows that the best analysis recognizes these sounds as single segments but with internal complexity, as suggested, but not overtly argued for, in Joseph & Philippaki-Warburton (1987).