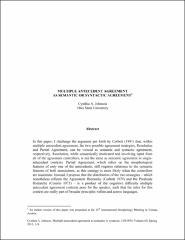 In this paper, I challenge the argument put forth by Corbett (1991) that, within multiple antecedent agreement, the two possible agreement strategies, Resolution and Partial Agreement, can be viewed as semantic and syntactic agreement, respectively. Resolution, while semantically motivated and involving input from all of the agreement controllers, is not the same as semantic agreement in singleantecedent contexts. Partial Agreement, which relies on the morphological features of only one of the antecedents, still requires reference to the semantic features of both antecedents, as this strategy is more likely when the controllers are inanimate. Instead, I propose that the distribution of the two strategies – which nonetheless reflects the Agreement Hierarchy (Corbett 1979) and the Predicate Hierarchy (Comrie 1975) – is a product of the cognitive difficulty multiple antecedent agreement contexts pose for the speaker, such that the rules for this context are really part of broader principles within and across languages.