Prosody of Focus and Contrastive Topic in K'iche' 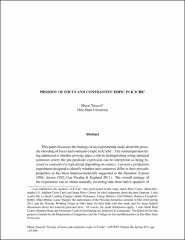 This paper discusses the findings of an experimental study about the prosodic encoding of focus and contrastive topic in K'iche'. The central question being addressed is whether prosody plays a role in distinguishing string-identical sentences where the pre-predicate expression can be interpreted as being focused or contrastively topicalized depending on context. I present a production experiment designed to identify whether such sentences differ in their prosodic properties as has been impressionistically suggested in the literature (Larsen 1988; Aissen 1992; Can Pixabaj & England 2011). The overall strategy of the experiment was to obtain naturally occurring data from native speakers of K'iche' by having them repeat target sentences they heard in conversations. The phonological analysis showed that content words in K'iche' have a rising pitch movement, a finding which is in line with Nielsen (2005). The acoustic analyses of several variables yielded a significant effect of condition only in the range of the F0 rise associated with focused and contrastively topicalized expressions. However, the difference across conditions is only ~6 Hz which may not be perceivable by listeners.

The fieldwork for this project is funded by the Department of Linguistics and the College of Arts and Humanities at The Ohio State University.