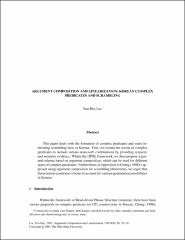 This paper deals with the formation of complex predicates and some interesting scrambling facts in Korean. First, we extend the notion of complex predicates to include various noun-verb combinations by providing syntactic and semantic evidence. Within the HPSG framework, we then propose a general schema based on argument composition, which can be used for different types of complex predicates. Furthermore, in opposition to Chung (1998)’s approach using argument composition for scrambling phenomena, we argue that linearization constraint is better to account for various permutation possibilities in Korean.