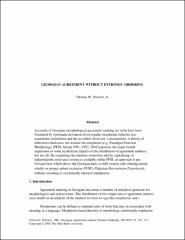 Accounts of Georgian morphological agreement marking on verbs have been frustrated by systematic deviations from regular morphemic behavior (co-occurrence restrictions and the so-called ‘inversion’ construction). A theory of inflection which does not assume the morpheme (e.g. Paradigm Function Morphology (PFM; Stump 1991, 1993, 2001)) permits the ready formal expression of some recalcitrant aspects of the distribution of agreement markers, but not all. By expanding the database somewhat and by capitalizing on independently motivated resources available within PFM, an approach is put forward here which shows the Georgian facts to fully respect rule ordering based wholly on proper subset exclusion (PFM’s Pāninian Determinism Hypothesis), without resorting to extrinsically imposed stipulations.