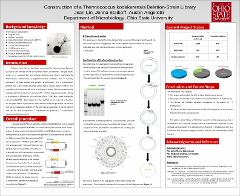 The biological world is divided into three primary Domains, two prokaryotic Domains, the Archaea and Bacteria, and the Eukaryotes. The Archaea were only first recognized late in the 20th century and, at first, proved difficult to investigate due to the lack of genetic systems. This barrier was removed by the discovery in 2003 that Thermococcus kodakarensis, a hyperthermophilic Archaeon, is naturally competent for DNA uptake and genetic recombination. Since then, to take advantage of this discovery, many genetic tools have been developed and we are now constructing a T. kodakarensis deletion–strain library. The genome is predicted to contain 2,306 protein-encoding genes, and are constructing individual strains, each with one non-essential protein-encoding gene deleted. To do so, each gene is first cloned to generate a plasmid (designated an A-plasmid) that is transformed and amplified in E. coli. Oligonucleotide primers are then used to prime inverse polymerase-chain reactions (PCR) using the A-plasmid DNA as the substrate that generates a B-plasmid, a plasmids in which the target gene is precisely deleted. The accuracy of each deletion of a target gene is confirmed by DNA sequencing. The B-plasmid is then used as donor DNA to transform T. kodakarensis and so introduce the deletion into the T. kodakarensis genome. To date, we have constructed and confirmed by DNA sequencing, >2000 A-plasmids, ~700 B-plasmids and ~100 T. kodakarensis deletion strains. When finished, this will be the first archaeal deletion-strain library and will serve the archaeal research community as a resource for investigations of all aspects of archaeal biology, physiology, and hyperthermophily. It will also provide a valuable tool for investigations of the many molecular biology features that are common to Archaea and Eukaryotes.