Women of Science Fiction in the 1970s 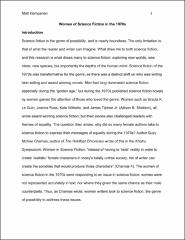 The 1970s were an important time not just for science fiction, but also in the fight for gender equality. Published science fiction, as well as science fiction fan fiction of the 1970s did not provide an accurate or realistic representation of women. This led to many writers to use their pens as a mode to create stories that pushed limits of what people thought of in regards to gender equality. These writers created empowered but importantly realistic female characters that were starkly different than the majority of female characters in science fiction at the time. If we view literature as an avenue towards inspiration, then many science fiction writers were writing in the 1970s to inspire readers towards a greater understanding of themselves. I looked at the Khatru 3 & 4 Symposium: Women in Science Fiction (1975), which is incredibly important as it not only outlines the challenges and opportunities for women writing science fiction in the 1970s. It also offers insight into how these writers wished to contribute to creating a future that inspired those who read their work to think and challenge then-current views of gender equality. Specifically I look at works by Ursula K. Le Guin, Joanna Russ, Kate Wilhelm and James Tiptree Jr. in order to show how these writers fought against the norm in published science fiction.