Investigating the potential for use of the endangered species, running buffalo clover (Trifolium stoloniferum) on reclaimed mine-land. 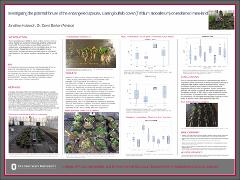 Running buffalo clover (RBC) is native to Ohio, however, loss of prairie habitat has resulted in it becoming a federal endangered species. Presumed extinct around 1940, researchers rediscovered small populations in the mid-1980s along the Ohio River corridor. Though the U.S. Fish and Wildlife Service implemented management plans and state agencies attempted reintroductions, the species remains in a perilous state in the wild. The objective of this study is to determine the tolerance of RBC to acidic and sulfuric/ferrous soil. The hypothesis is that a commercial or private utility may encourage larger reintroductions and invigorate new interest in a deserving, endangered endemic species. Previous research has investigated the forage potential of RBC, however, it has failed to outperform its ‘cousin’, white clover (Trifolium repens). In this study, three strains of RBC were treated with nutrient solutions in a factorial arrangement of two pH (5.0 and 6.0) and two FeSO4 levels (0 and 1000 mg/L) in the Kottman greenhouse. The experimental design was a 4 x 2 x 2 factorial treatment structure, with a randomized complete block arrangement for the four replications (64 pots in total). Plants were established from stolons on 16 December 2016, and grow in vermiculite to facilitate measurements on roots. . The responses for RBC were compared with comparative Trifolium repens, treatments. The nutrient solution treatments began on 20 January 2017, at which time RBC plants averaged 0.549 g of shoot, and 0.481 g of root, whereas white clover averaged 0.0825 g of shoot, and 0.0694 g of root. The persistence of running buffalo clover in vermiculite medium—a first in its research history—as well as the prolific root mass suggest a suitability for reclamation applications. Month-old root-balls display a firm establishment in destitute media. After a two months pH and sulfur treatments, root mass and aboveground growth will be measured. Should running buffalo clover outperform white clover, it might recover as a species with introduced, reclamation populations serving to revegetate their endemic range on protected habitat.