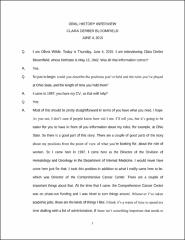 Clara Derber Bloomfield was hired at The Ohio State University in 1997 as the Director of the Division of Hematology and Oncology in the Department of Internal Medicine and Director of the Comprehensive Cancer Center. At the time she came, the Comprehensive Cancer Center was on phase-out funding, and Bloomfield was hired to turn things around. Bloomfield describes a few of her experiences from Medical School, her process of being recruited to Ohio State, and the work she did to make the Cancer Center stronger academically, including her requirement that all faculty at the Center become sub-specialized in a disease within a year of her hiring. In 2006, Bloomfield became a Distinguished University Professor. She is the recipient of a wide array of major awards in cancer clinical translational research, and was the first woman to receive the Joseph H. Burchenal Memorial Award for Outstanding Achievement in Clinical Cancer Research from the American Association for Cancer Research. She was also the third woman to receive the Henry M. Stratton Medal from the American Society of Hematology and the third woman to receive the David A. Karnofsky Memorial Award from the American Society of Clinical Oncology.