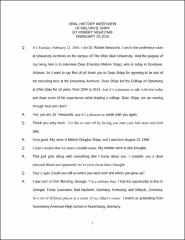 Dr. Melvin D. Shipp describes his career at OSU’s College of Optometry, culminating in his role as Dean. Shipp was born in 1948, and because of his father’s military career, he moved a great deal as a child, including Germany where he graduated from high school. Shipp subsequently attended Indiana University to earn his bachelor’s degree, and he decided to stay there to earn a graduate degree in optometry. During his fourth year in graduate school, he worked with Dr. John Amos designing lab exercises for a course, which spurred Shipp to go into academic optometry. Shipp then served in the Navy as an optometrist for four years. After his active duty ended, he decided to pursue a graduate degree in public health, and he chose a university where he could also practice. He remained at the University of Alabama at Birmingham there for 25 years. He was subsequently asked to apply for the position of Dean at OSU’s College of Optometry, and he served in this position from 2004 through 2014. Shipp describes the College’s achievements during his tenure and the people who helped him lead those efforts. He also discusses his tenure as the first optometrist to lead the American Public Health Association and his view of what the profession of optometry might look like in the future.