The Effects of Deployment on Military Family Roles 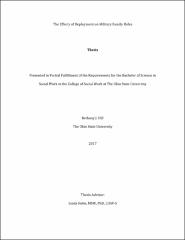 The United States Department of Defense is the largest employer in the world, employing 3.2 million people, most of whom are military service members. With spouses and children included, the number of Americans considered part of a military family reaches five million, with about two million military children. Over 50% of service members are married and more than 40% have children. Sixty percent of military service members are deployed at least once, with nearly half of this population experiencing between two and four deployments throughout their military careers. This qualitative study examines the effects of deployment on family member roles through the different stages of deployment (pre-deployment, deployment, and post-deployment-reintegration). The use of structured interviews and the framework of Role Exit Theory provide an opportunity to understand the changes in roles that military families experience. Families discuss the changes faced as well as the opportunities to try out different roles over a deployment period. Though the family members experienced differences in their ways of adjusting to the different periods of deployment, many showed great resilience and adaptability in the face of major life changes. The responses of participants in regards to roles they wished to maintain or relinquish varied greatly and gave a clear picture of the diversity of these families. This study examines a new element of military family life in considering personal perceptions of self and roles changed because of time apart due to military involvement. The findings will contribute to the knowledge base of military families and to the development of military family supports.