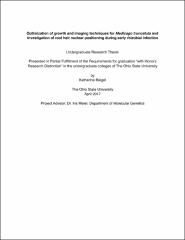 Legumes establish mutualistic relationships with endosymbiotic nitrogen-fixing rhizobia, which develop and dwell within nodules at the plant's roots. Rhizobia present in the legume's edaphic environment respond to compounds secreted by the plant with Nodulation (Nod) factors. The legume's root hair tips swell in response to these Nod factors, followed by additional cellular changes of the root hair that eventually coordinate infection thread (IT) formation, including curling of the root hair tip around a rhizobium. One of the suspected changes in the initial stages of nodulation is the movement of the root hair nucleus to the root hair tip around the time of root hair curling, based on anecdotal observations of the nucleus at the root hair tip after curing has completed. This positioning may indicate tip growth, and it has also been shown that the path of the IT down the root hair follows behind the nucleus. However, the details and subtleties of nuclear movement in the stages prior to IT formation are not well characterized. Using a stable Medicago truncatula (Fabaceae) nuclear localized cameleon Ca2+ reporter line (YC3.6) and a dsRed-labeled Sinorhizobium melliloti rhizobia strain, I refined a methodology for observing root hairs and their nuclei. I tested and adapted growth, infection, and imaging methods from previous literature to establish a protocol for making observations with these two particular lines. I identified open source software for making observations and collecting data from confocal images. With this protocol, seedlings of M. truncatula were monitored and imaged using z-stacks every 24 hours for five days after time of inoculation using live on-plate imaging techniques and confocal fluorescence microscopy. The root hairs imaged were those in the maturation zone just above the elongation zone. Measurements were made of the distance between the nucleus and the base, the distance between the nucleus and the tip, and the total length of the root hair. Compared to the control, the inoculated root hairs exhibited nuclei that were on average closer to the tip of the root hair for the fourth and fifth days of observation. The ratio of the nucleus-to-tip distance over the total length of the root hair was also significantly lower in the inoculated group than in the control. Additionally, the average distance between the root hair nuclei and the tip of the root hairs on those days was close to the reported nucleus-to-tip distance that occurs during stages of tip growth in root hairs. This suggests that the root hairs may have been in a state of tip growth at this stage after inoculation, perhaps in anticipation of tip growth for root hair curling, although specific root hairs were not tracked. More investigation is needed in order to understand the nuclear dynamics in root hairs, especially with regard to the activity of specific root hairs over time and root hairs of similar lengths. These experiments will be the basis for investigation into the molecular dynamics and potential connections between early stages of nodulation and nuclear movement.