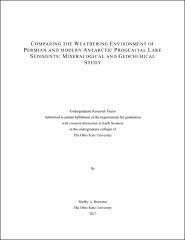 The Antarctic continent has been in a polar to subpolar position since the Permian period. Although it has experienced milder climates over this time period as evidenced by corals in the fossil record, Antarctica did undergo extensive glaciation during the Permian. This is based on the abundance of Permian tillites (sedimentary rocks derived from glacier tills) found in the Transantarctic Mountains. In this research, I have compared Permian age proglacial lake sediments that are associated with tilites to modern proglacial lake siltstones and mudstones from Antarctica. This was done to determine the climate, especially the amount of glacier melt that occurred when these Permian sediments were deposited. The modern lake sediments are deposited in perennially ice-covered lakes by ephemeral streams that only flow 6 to 12 weeks a year. The geochemical analyses of the Permian samples and the modern sediments from Lake Hoare in the McMurdo Dry Valleys suggest that the Permian samples are more highly chemically weathered than the modern sediments. The mineralogy of Lake Hoare sediments contain more primary minerals than chemical weathering produced minerals in the Pagoda Formation rocks, thus supporting the geochemical analysis that the Pagoda Formation minerals have been more weathered. All these data suggest that the Permian lake samples were deposited in a warmer, more hydrogeologically active environment than were the modern lake sediments. These data support previously published sedimentological and paleontological data that the Pagoda samples were deposited under more temperate or warm-based proglacial conditions than what is observed in the McMurdo Dry Valleys today.