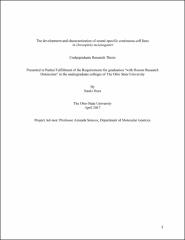 Neurodegenerative diseases affect millions of Americans and are caused by the deterioration of neurons in the central nervous system (CNS). The mutations that cause these neurodegenerative diseases have been modeled in Drosophila melanogaster (fruit fly) transgenic lines that produce flies with neurological defects mirroring the human pathology. Meanwhile, continuous cell lines have transformed biomedical research, making it possible to study biological systems on a scale requiring large numbers of similar cells. However, there is a lack of continuous cell lines of neuronal lineage in Drosophila melanogaster available in the scientific community that would allow for the modeling of neurodegenerative diseases and the detailed study of specific mechanisms within the nervous system. Beyond modeling a neurodegenerative disease phenotype in a fly, continuous cell lines of neuronal lineage would offer a large, homogenous population of cells to potentially study disease pathways and gene function, to test pharmacological targets, and to examine processes occurring before differentiation. The primary objective of this study was to utilize the expression of oncogenic RasV12 and inhibition of the Notch signaling pathway to produce neuronal cell lines in Drosophila melanogaster. In the first approach, the overexpression of RasV12 was limited to cells of neuronal lineage in order to promote their survival over other cell types in the culture. In the second approach, the Notch signaling necessary for segregation of progenitor cells into neuroblasts or epithelial cells was inhibited throughout the Drosophila embryo; without Notch signaling, these progenitor cells all become neuroblasts. For the second objective of the study, cell lines previously established in the lab from constitutive RasV12 expression and that appeared to exhibit neuronal properties were characterized with neuronal lineage markers. This study tests the efficacy of utilizing RasV12 or the inhibition of the Notch signaling pathway for the production of continuous cell lines of neuronal lineage to model and develop therapies for neurodegenerative diseases.