The Girl, the Jew, and the Maus: Holocaust Narratives in Controversial Media 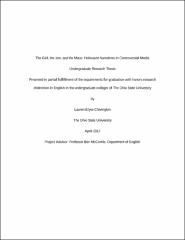 The Diary of a Young Girl, Maus, and “The Standover Man” in The Book Thief are all unconventional depictions of the Holocaust in that they depart from traditional literary form (diary, graphic novel, and cartoon palimpsest). They have all received scrutiny over the years, however they have value as art as well as potential use as educational tools for children because of the varying levels of minimalism used in their unique media styles. While there is a wealth of research about the Holocaust, as well as a good amount of scholarship on the validity of Holocaust survivor’s narratives, the topic of teaching such difficult subjects to children is lacking regarding specific literature such as these. It is the purpose of this research to explore the controversies surrounding these unique narratives as well as their potential as teaching tools. What began as a short paper about the three works has been developed through research and interrogation of the three primary texts as well as the secondary texts referenced throughout. The following research attempts to defend these narratives’ place in cultural memory, analyze what is gained and lost by their unique media, and examine their potential use in the educational field. The process has been ongoing since the initial project in 2015, however further conclusions could and should be made by implementing studies that track the emotional and intellectual responses to the texts by children of various ages. Interrogating these texts more closely leads to a deeper appreciation for and understanding of these texts as art, literature, and as educational tools. Finding a better way to teach children about the unimaginable has vast implications for the educational field, and preserving these texts and others like them in our collective memory will help that aim.