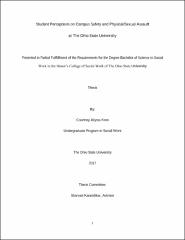 According to the National Sexual Violence Resource Center, one in 5 women and one in 16 men are sexually assaulted while in college. The Clery Act (1990) requires colleges and universities to disclose campus safety information, and provide requirements for handling sexual violence and emergency situations. However, there isn’t enough literature available on student perceptions during such sexual violence encounters or dangerous circumstances. The purpose of this research is to understand perceptions of students on physical/sexual assault at The Ohio State University, and their attitudes towards administration in regards to campus safety, prevention, and response to violent occurrences. To examine these objectives, an online survey with Likert type items was administered to 70 students living on or near Ohio State’s campus through social media and email. Of these students, 13 identified as male, 56 identified as female, and 1 identified as non-binary. Preliminary results indicate that 75% of participants feel safe on Ohio State’s campus, 28% feel that administration does a good job informing students on how to handle a potentially dangerous situation, and 69% feel that administration properly handles dangerous situations after they have occurred. In addition to these results, 83% of participants personally know someone who has been a victim of sexual assault, 56% personally know someone who has been victim of a physically violent crime, 38% have been personal victims of sexual assault, and 8% have been personal victims of a physically violent crime. The results of this research indicate a need for administration at Ohio State to focus on prevention mechanisms so students feel better prepared when unexpected dangerous situations occur. This study provides a recommendation for further research on student perceptions on campus safety and physical/sexual assault across a larger sample population on various campuses across the United States.

Outstanding Thesis of the year 2017