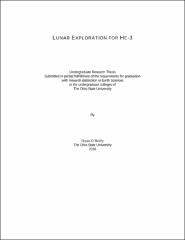 As an essential component in the cleanest and most efficient form of fusion, Helium-3 (He-3) has the potential to produce incredible magnitudes of energy. However, naturally occurring He-3 only makes up 1.37 parts per million of He on Earth. The U.S. stockpile of He-3 has gradually decreased since 2001, with the price of He-3 jumping from 200 to 2,000 USD per liter. This reduced supply is largely due to the Department of Homeland Security’s demand for neutron detection systems along our borders following the events of September 11th 2001. Lacking an atmosphere, the Moon’s surface is only partial shielded from the solar wind that carries He-3 produced by fusion within the Sun. As the solar wind washes over the lunar surface, the He-3 embeds in the regolith. Analysis of Apollo samples suggests that the regolith holds a minimum He-3 concentration of about 20 ppb, which makes the regolith a viable source of He-3. Although satellite remote sensing cannot directly map this Helium isotope, it can map the distributions of titanium and volatiles, such as hydrogen, along with other components that act as proxies for concentrations of He-3. Using satellite data from the NASA’s Lunar Prospector mission, two areas of considerable potential for holding large concentrations of He-3 were identified. Mare Tranquillitatis (8.5˚N 31.4˚E), for example, has the highest concentration of the Ti proxy that is indicative of high He-3 concentrations. This area also provides access to other elements such as iron, hydrogen and oxygen, which would be essential in any lunar mining mission. The South Pole Aitken basin also is of interest due to its large permanently shadowed areas that help to hold volatile He-3 and limit its migration due to diurnal heating.