The Holodomor and the Ukrainian Diaspora: Historical Narratives in a Changing World 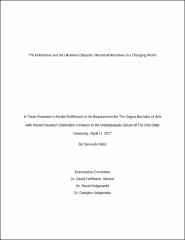 In the early 1930s, a famine often called the Holodomor took place in Ukraine, and millions of people died. In recent decades, many, particularly the Ukrainian diaspora around the world, have suggested the Holodomor was genocide against the Ukrainian people by the Soviet government, and several countries have recognized the famine as such. No scholarly consensus exists, however, as to whether the Holodomor was genocide. This project therefore focuses on the connection between the Ukrainian diaspora in the West and its advocacy for recognition of the Holodomor as genocide despite a lack of consensus on the subject. To investigate, many books, newspapers, and websites on the famine were read, as well as on the history and behaviors of the Ukrainian diaspora. The project has relied heavily on primary sources such as public statements from various politicians and governments, current websites directly expressing the views of Ukrainian diaspora groups, and newspapers expressing certain points of view regarding the famine. Because the Ukrainian diaspora positioned itself into places of prominence in new communities, current research shows it has done significant work to advocate for the awareness of the famine as genocide. Many declarations, monuments, laws, museums, and the like have been created to recognize and commemorate the famine as genocide, including a monument in Washington, D.C. This progress towards recognition of the Holodomor despite the lack of scholarly consensus suggests that societal power of diaspora populations and their advocacy on behalf of certain issues can be stronger than established scholarship in changing societal and historical narratives. Moreover, the Holodomor is significant in current Russian and Ukrainian relations: the current conflict in Ukraine has led to repeated allusions to the Holodomor and its role in the current political narrative.