Perceived Causes of Mental Illness and Stigma by Association 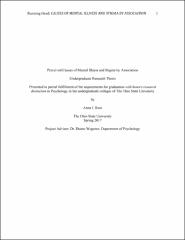 People linked with stigmatized others often face similar social and psychological effects to those with whom they are tied. This phenomenon is referred to as stigma by association. Previous research demonstrates the spreading of general negative attitudes accompanying stigmatized people to those with whom they are associated. In the current study, I examined stigma by association regarding people with mental illness and their friends and family. Research participants were given information highlighting either a genetic cause for Schizophrenia or an environmental cause. Then, participants evaluated someone described as linked to a person with Schizophrenia but with varying degrees of environmental and genetic closeness (e.g., an identical twin versus a friend). The study results indicated that the strength of perceived stigmatized qualities in neutral targets can be affected by alleged causes of the disorder and the relationship of the target to the stigmatized person. Consistent with holding a default view of Schizophrenia as being caused by genetics, participants who received information describing an environmental cause (and as a result may believe in two causes: genes and environment) were especially likely to view a target person as possessing stigmatized qualities (e.g., aggressiveness) when the target shared both genetics and environment with the person with Schizophrenia. Associative stigma for this shared-genetics-and-environment target exceeded that for targets sharing just one cause (e.g., genetics or environment). This suggests that stigma by association increases when a target is connected to a stigmatized person in multiple ways when those connections relate to the perceiver’s beliefs about causes of the stigmatizing disorder. This work will impact the field of mental health by addressing how education on the true causes of mental disorders might affect stigma by association.