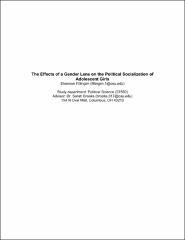 Women's participation in government matters tremendously to the well-being of a nation, yet women still face multiple societal and cultural obstacles as they strive to achieve the goal of full participation in the political arena. The most troubling of these barriers is the perception that women have of themselves as being less qualified than men to engage in political life. In this study, researchers evaluated the effect of a gender lens in a seminar discussion program on the political self-esteem of middle school students. Participants were randomly sorted into two groups. Before each discussion session, participants read a short news article about the day’s topic of discussion. At each discussion session, the researcher guided students in answering critical reading questions. While the structure of both the control and the experimental group discussions were the same, the articles chosen for the experimental group featured a gender lens by focusing specifically on the involvement of women in the issues at hand, while the control group read articles with a more general bent. The effect of the discussion groups was measured by pre-program and post-program surveys, consisting of open ended and multiple choice questions. Ultimately, the gender lens did have a statistically significant effect on the experimental group’s political self-esteem: the change in means between pre-treatment and post-treatment responses to questions about political self-esteem was significant at a 95% confidence level for four out of six survey questions. Although this study is limited by its small sample size from being truly representative of the population, the results of this study are encouraging for researchers focusing on the factors preventing women from achieving political parity. This study shows that including a gender lens in discussion of current events helps girls see themselves as future political actors.