The Implications of "Unmoored" Young Men: Youth Bulges and Protests in an African Context 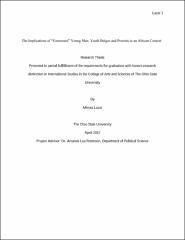 Much research has considered the effects of the presence of large youth populations in various areas on conflict. The literature lacks a clear verdict, although some have suggested the existence of a significant link between youth bulges and political violence. My research seeks to examine the connection between the presence of large populations of people between the ages of 15 and 24 and protest activity. Unlike previous studies, the scope of this project is limited to the experience of Sub-Saharan Africa, and the youth bulge is tabulated differently. The data for this research was collected from various databases of relevant indicators. I utilize a fixed-effects regression model that allows for an examination of the change of the relationship between age and protests in the region over a 25-year period. Controlling for several variables, I find a small, but significant effect of the youth bulge on protests. The study also posits that certain societal conditions, such as the prevalence of polygamous marriages, tend to strengthen the relationship by offering young men few alternatives to conflict. I look at two countries, Nigeria and Tanzania, and determine that sub-national data also support the notion that the practice of polygamy fortifies the observed relationship.