Comparison of vowel acoustics in children from the Northern, Midland, and Southern regions of the United States 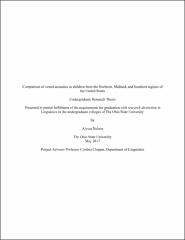 This project examines the development of children’s regional dialect vowel systems through a comparison of the acoustic properties of vowels produced by 4-11 year olds from the Northern, Midland, and Southern regions of the United States. The Northern dialect is characterized by the Northern Cities Vowel Shift (NCVS), which involves raising of the vowel /æ/. The Midland dialect is characterized by the fronting of high-back vowels and by the Canadian Shift, in which /æ/ is retracted. The Southern dialect is characterized by monophthongization of /aɪ/ in addition to back-vowel fronting. Color names were elicited from 61 children. The first and second formant frequencies of the vowels in these words were obtained to model the participants’ vowel spaces and to reveal the developmental trajectory of dialect-specific vowel production within each region. The features I investigated were /æ/ raising/lowering and fronting/backing, /u/ fronting, and /aɪ/ monophthongization. I found that Northerners had the smallest distance between /æ/ and /ɛ/, which is evidence of the NCVS. There was no effect of region on /u/ fronting. Southerners did not produce /aɪ/ monophthongization; further research is needed on this feature. Finally, I did not find clear patterns relating to age. The results of this project suggest future directions for the study of dialect development in children.