Links Between Discrimination and Sexual Orientation Self-Disclosure in Bisexual Individuals: The Moderating Effect of Relationship Satisfaction 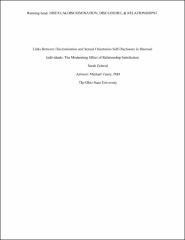 Bisexuals experience sexual orientation-related discrimination from both the heterosexual and gay communities (Brewster & Moradi, 2010). This discrimination has been linked to bisexuals’ disproportionately high rates of mental illness compared to their gay and straight peers (Molina et al., 2015). Sexual orientation self-disclosure among bisexuals is lower than among gay individuals, and thus this has been proposed as an underlying mechanism for bisexuals’ poor mental health outcomes (Schrimshaw et al., 2013). Another mechanism may involve the nullification of bisexual identities in monogamous relationships (Hartman-Linck, 2014), which is likely to be associated with negative psychological consequences (Pachankis, 2007). This theory has not been experimentally examined and is in contrast to research showing that romantic relationships positively influence psychological health (Gordon et al., 2012). This study experimentally examines the role of relationships (specifically, relationship satisfaction) in moderating the link between discrimination and disclosure. Bisexual adults (N=136) completed self-report measures about relationship satisfaction, and viewed two bisexual-specific discrimination-inducing film clips of the heterosexual and gay communities, while completing mood ratings throughout the study. Finally, they completed a forced-choice sexual orientation disclosure task. Results suggest that higher levels of relationship satisfaction buffer against the harmful impact of discrimination on likelihood to disclose, while lower levels of relationship satisfaction enhance the harmful impact.