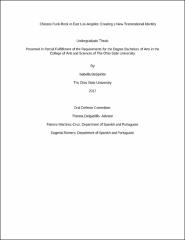 My research examines the experience of Chicana punk rockers who entered the punk rock scene in Los Angeles in the 1970s and analyzes how this impacted their sense of ethnic, national, and gender identity. I argue that these experiences represent a new era of the punk rock scene, one of diversity and transnationalism that continues today in Los Angeles punk rock. My research contributes to Latina/o Studies, Music Studies, and Gender Studies. The texts I focus on include memoir and documentary film. My analysis of a personal memoir by punk rocker Alicia Armendariz, a.k.a. Alice Bag, called “Violence Girl” explores how she created her own sense of transnationalism by maintaining her Mexican-American identity in the white-dominated punk scene. I also analyze the Netflix documentary “Los Punks: We Are All We Have” to consider the diversity we can see in punk rock today in Los Angeles; this is where I argue that Alice Bag has made a lasting contribution. My findings include that Alice Bag was a widely influential early punk rocker who contributed to the development of this new musical genre in the U.S. by making punk rock more diverse and by carving out a space for herself as a woman and a Mexican-American. This work is significant because there is limited scholarship on women and Chicanas in punk rock, where only 15% of the total inductees in the Rock and Roll Hall of Fame are women. This work further highlights the important role Mexican-Americans play, and continue to play, in the development of major music scenes in the United States.