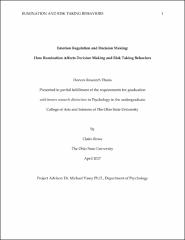 Rumination is an emotion regulation strategy consisting of repetitive thinking about things that have happened in the past. Excessive use of rumination has been linked to different kinds of behavioral dysregulation such as binge eating, binge drinking (Nolen-Hoeksema et al., 2008) and non-suicidal self-injury (Selby & Joiner, 2009). Selby argues that these risky and impulsive behaviors serve as a mechanism to try and distract oneself from the escalating spiral of negative affect elicited by rumination (2009). The present study tests this model by investigating how trait level rumination is associated with engagement in risky decisions in order to avoid a ruminative task. To investigate this, we designed a modified probability discounting task that asks participants to make choices and take risks about a hypothetical rumination task. For our analysis, we used methods described by Reed et al. (2012) to find the K estimate and the Area Under the Curve (AUC), both of which measure one’s decision making curve. Our results showed no relationship between rumination and choices on the probability discounting task for either the K estimate (p = .581) or the AUC (p =.362). Future research should improve upon this task by using and adaptive discounting framework and work towards a better understanding of the pervasive cycle of chronic rumination.