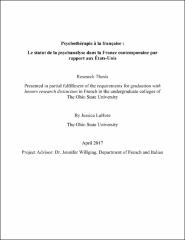 Psychotherapy à la française: The status of psychoanalysis in contemporary France as compared to the United States

Psychoanalysis has played a critical role in the development of modern psychology and psychotherapy. However, psychotherapy in the majority of the Western world, including the United States, has shifted towards a cognitive-behavioral approach that advocates for evidence-based practice. In France, psychoanalysis remains highly influential, most notably defended by a highly outspoken minority of lacaniens, psychoanalysts who subscribe to the theories of Jacques Lacan (1901-81). While previous studies offer possible explanations for the persistent influence of psychoanalysis in France, little research has treated the current perceptions of psychoanalysis and cognitive-behaviorism there. This study begins by comparing the trajectory of psychoanalysis in France and in the United States. It then evaluates the current climate amongst French psychologists, psychiatrists, and psychoanalysts via observations at the Centre Hospitalier Sainte-Anne, the largest psychiatric hospital in France, and in-person interviews. It appears that although the ongoing debate between cognitive-behaviorists and psychoanalysts in France has been renewed in the twenty-first century, little theoretical shift has occurred within the fields of psychiatry and psychology there. The deep philosophical and historical roots of psychoanalysis, as well as the continuing influence of Jacques Lacan, secure its role within French psychiatry, psychology, and society. Consequently, many French psychoanalysts view critiques of psychoanalysis as a threat to French culture as a result of American influence. While its focus is the difference between current perceptions of psychoanalysis in France and the United States, this study explores more generally how cultural context plays a role in past and present diagnosis and treatment of mental illness and thus contributes to the debate over whether international standards of diagnosis and treatment are attainable.

Second Place in Histories of Literatures, Religions, and Cultures at the 2017 Denman Undergraduate Research Forum