The 2015 Paris Attacks: A Turning Point for French Citizens of Maghribi Descent? 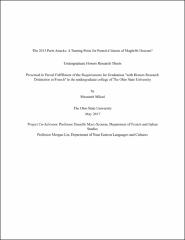 France is a multicultural country that attempts to preserve its social model of universalism by concealing the diversity of its non-white citizens. Citizens must conform to a “neutral” identity in the public sphere, where hyphenated and individualistic identities, as they exist in the U.S., are foreign and unacceptable concepts. In the aftermath of the November 13, 2015 attacks in Paris, this social model is crumbling. My research examines how the November 13 attacks impacted the lives and identities of French Maghribis. This community has been facing racism in France, such as employment discrimination and not qualifying as “pure” French, since the beginning of the 20th century, in the name of universalism and laïcité (secularism). After spending four months in France interviewing a diverse group of French citizens about identity, pluralism and diversity in France, I found that the attacks brought to light the problematic claims that the universalism France’s government practices results in equality. The consequences of this social model climaxed on November 13, 2015, where France’s attackers were not foreigners, like those of America’s 9/11, but were French-born and raised. As such, the attacks ignited a crisis over what it means to be French, the place of the French Maghribi community in this definition, and the problematic notion and façade of universalism. My research is applicable to broader issues faced by democratic countries worldwide, and is of particular interest to Americans with the commencement of a new presidency and a heightened public discourse regarding Islam and multiculturalism. By examining the issues that plague French society, this research speaks to what it means to be a pluralistic democracy, questions how integration contributes to a well-functioning democracy, and analyzes the destiny of countries where hyphenated identities are a taboo.