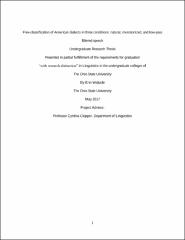 The dialects of American English have distinct features: these features include vowel shifts – the Northern Cities Chain Shift and the Southern Chain Shift (Labov, Ash, & Boberg 2006; Clopper, Pisoni, & deJong 2005) -- and prosodic variation, including intonation and rhythm (Clopper & Smiljanic 2011, 2015). In the current study, I ran three conditions to test which prosodic cues listeners were using when classifying talkers by regional dialect. American English has six distinct dialects: Northern, Southern, Midland, Mid-Atlantic, Western, and New-England (Labov, Ash, & Boberg 2006). Participants listened to 60 talkers, 10 from each of the six regional American English dialects, and were asked to sort the talkers into groups by dialect using free-classification. All of the talkers read the same sentence, which was manipulated in two of the three conditions. The first condition left the talkers’ voices natural and un-manipulated. The second condition monotonized all of the talkers’ voices. The third condition ran all of the talkers’ voices through a low-pass filter, which removed everything above 400 Hz. Results indicated that all participants, regardless of condition, made about 9 groups of talkers on average. Results also revealed effects of condition and talker dialect on accuracy. For the condition accuracy, the monotonized condition had the most accurate groupings, while the low-pass filtered condition had the least accurate groupings. For the talker dialect accuracy, the Western dialect had the most accurate groupings while the Southern dialect had the least accurate groupings. Multidimensional scaling (MDS) plots visualized the groupings made for each condition. In both the natural and monotonized condition, participants were using dialect and gender to sort talkers. In the low-pass filtered condition, participants were using gender and not dialect to sort talkers, and the MDS plot looked different from the other MDS plots indicating that intonation alone was not effective for dialect classification.

This thesis was funded by the Undergraduate Research Scholarship.