An Investigation of the Trolley Problem in Regard to Automated Cars 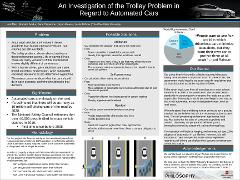 Automated cars will soon be a viable option for personal use. Although it is reasonable to expect that they will be involved in significantly fewer traffic accidents on average than other cars, automated cars will not be able to prevent all crashes. This raises the issue of what actions an automated car should take in various dangerous situations. Several proposals have been advanced in the growing literature on this issue. The first option is the utilitarian approach, which means that the car will always perform the action that will result in the least harm. While this approach saves the most lives in each case, research shows that many consumers would not purchase an automated car that would possibly choose to sacrifice the driver’s life. If people don’t buy automated cars, then a large population of people will continue to die in human-caused traffic accidents. Another option is the self-preserving approach, in which automated cars would protect the occupants’ lives over all else in every situation. This approach may lead to higher use of automated cars, which would save many lives overall. However, it is easily criticized as selfish and unethical because there is a possibility of crashes in which several people die instead of one person, and in which innocent pedestrians die instead of those who assumed the risks of accidents by taking to the road. The third option is to have automated cars randomly decide whom to save in a crash scenario in order to prevent bias or guilt. However, this approach saves fewer lives than the utilitarian approach while potentially being as morally objectionable as the self-preserving approach because more lives could be saved. The purpose of this project is to present a new option that improves upon the utilitarian approach using a methodology of traditional philosophical analytical reasoning, informed by factual premises from social psychology and engineering.